Oxtails!?  What is that?  So many are unfamiliar with this cut of meat and shy away from purchasing and cooking… self included until recently.  I think in the recesses of my mind I remember eons ago doing something with oxtail… but I decided it was high time I just buy some and figure it out.

So what exactly are oxtails? 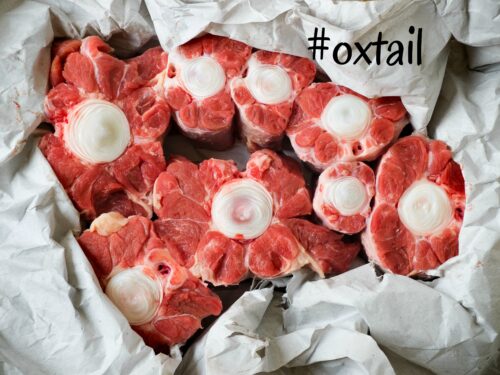 Nope, we don’t see oxen roaming pastures these days now do we?  So why are their tails in our grocery meat coolers?
Basically, what we see is simply the tail of a cow.  Long ago, it actually was oxtail, but the name has carried over to cows.  So the tail of the cow, just as with pretty much every other part of the cow we eat, is also pretty tasty!  The tail, usually about 8-10 pounds, is skinned, then cut into pieces.  For those seeking out gelatinous cuts of meat for healthy eating reasons, here you go!  And because of the nature of the beast and bone, it takes well to slow cooking like this braised recipe I concocted.

Used to be that because it is boney and fatty, it was cheap and considered a discard of the animal for poor folks. Yet over time, gourmands have discovered this flavorful part of the bovine and has caused the price of it to rise.  I usually find it for around $7.99+/lb., which is pretty expensive considering the volume of bone and fat. But hey, we know meat near bones IS more flavorful and fat keeps it nice and moist.

This cut isn’t for everybody, but if you’ve never cooked oxtail and appreciate some fat and don’t mind a little bone, give this a try.  Much of the fat cooks out into the rich and creamy sauce. If you just can’t bring yourself to do oxtail… you can substitute another cut of beef that is suited for slow cooking and braising… a few suggestions would be chuck, shank, stew beef… and this recipe is perfect for short ribs!  Look for inexpensive cuts… those typically tend to be your best bets for stews and braises.

One last thing… the prune. Such an underappreciated fruit.  After all… prunes are nothing but dried plums!  You like plums, eh?  Some packagers started calling them “dried plums” years back… a marketing ploy since, for whatever reason, prunes got a bum rap and bad “reputation” in the culinary world.  They figured out, probably from some expensive market testing, that folks will buy dried plums, but not prunes!  They get lost in stews like this one… while giving the gravy a delectable richness and sweetness you won’t get from anything else.  They also help thicken the sauce…

As for how to serve… well my favorite way is over creamy grits.  Like my Creamy Rosemary Parmesan Grits!

But this stew will do just fine spooned over mashed taters, even mashed sweet potatoes.  Or alongside risotto or orzo.
Whatever suits YOUR fancy.

At first glance, you might be intimidated by the recipe. Don’t be.  I promise the short amount of time it takes to pull it all together for a few slow cook’n hours will be worth the reward on the back end.  And be sure to pick up some nice crusty bread because this one has “Sop Me” written all over it.

PS… don’t forget dessert!  I fixed this Salted Butterscotch Crème Brûlée a day before to finish off this decadent yet peasant style meal.

Happy tail soppin y’all!  Do come on over and share your oxtail memories and experiences in my FB community! 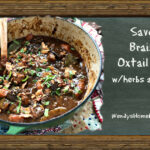 Chilly winter days make us want to throw something hearty and comforting in a big ol’ pot and let it slowly simmer for hours, filling the house with the enticing smell of what’s to come. This stew is a bit spicy, subtly sweetened by the prunes, with many layers of flavor.
Course: Main Course, Stew, Supper
Cuisine: American, Southern
Keyword: braised, oxtail, prunes, savory, stoup, stew, soup, state fair
Author: Wendy Perry 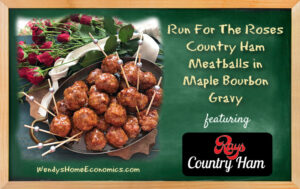 Run For The Roses Country Ham Meatballs in Maple Bourbon Gravy (and a “Wendy Discount!” too.)

Your Kentucky Derby party table won’t be complete without a few specific things… and this one checks a few boxes… country ham, meatballs and bourbon! 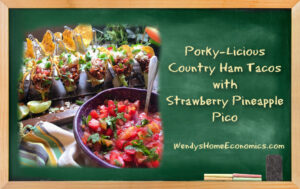 With the arrival of fresh local strawberries all around us now, it’s time to celebrate! Celebrate all the fresh produce coming our way with our country ham tacos at your Cinco de Mayo gatherings! 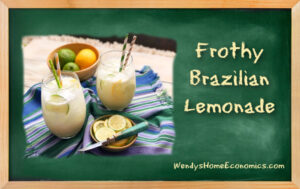 Traditional Brazilian Lemonade is made with limes (limes are more plentiful there). As delicious as that is, I’ve added lemon with the lime for an extra robust citrus flavor. Skip the seltzer if you like but we’re fond of the additional froth. This also makes a nice mixer for adult cocktails.

Scroll to Top
Thanks for subscribing!