…”two hot dogs and a drink” 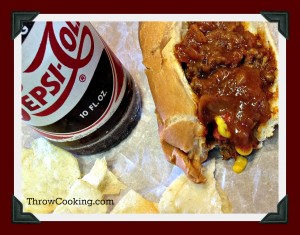 Kannon’s Cafe was an institution in downtown Zebulon, NC for decades. Although long gone, you can still enjoy their unusual chili by making it yourself.

When you have a craving, nothing will cure a hot dog hankering  like a good old hot dog (or two) and a drink… or as some of us say it, “drank.”  For those who don’t know, a drink/drank is what some folks call a pop or soda.  Just not what we call ’em in my parts and when we hear that, we know right off “you ain’t from ’round here.”

Growing up in my quaint town of Zebulon (NC), there was a little place on Arendell Ave. (aka “Main Street”) where folks would flock to, especially on Saturday mornings (yes, hot dogs for breakfast).  Kannon’s Cafe was a rather small place, with BIG chili… wobbly old-timey bar stools, the kind bolted into the floor… and pictures of the Pope and other symbolic Catholic accoutrement.  For most of us, those things were ‘weird’ because we didn’t know many (any) Catholics back then… being mostly  Southern Baptists and Methodists.  The only picture we had of any religious peeps was mostly limited to Jesus… so that little unframed ragged-edge picture of a big elderly man propped up on the shelf looking at you while eating at the bar in what appeared to be a big white sheet-type thing and crownish looking headgear was…. just weird.   My daddy did love to belly up to their cafe bar and tell a Catholic joke or two, especially if it involved the Pope.  Not to be mean… just to get those gals riled up a bit.  It worked.  Every time.

Although Kannon’s is long gone, you either l.o.v.e.d. their chili, or hated it… along with the “stink” of the invisible cloud over downtown Zebulon when it was cooking.  Patriarch “Mr. Barker” Kannon was old when I first remember him.  He just got older.  And when he could barely walk anymore, he would just sit in the window in that little wooden cafe chair, arms crossed on his big belly in his gray cafe coat…  and watch us all line up out the door for a hot dog and a drink… ice cold drinks in a flip-off metal top glass bottle like they ought to be…  retrieved by sister Lily… and mostly, you were either a “short coke” dranker or Pepsi fan.  I’m a Pepsi gal… that taste WAS born in North  Carolina ya know.

The three Kannon ladies did all the work… not going to name names here, but I always felt so sad for “L” because she was often treated shamefully and spoken to not-so-nicely by an older sister.  That little sister seemed to never be able to do anything right.  She was one person where the word “meek” comes to mind, yet her disposition and quiet smile was always kind.

There is no telling how many gabillions of dollars Mr. Barker sat in that window and watched come in the door… because of ‘the’ chili… and those bright red hot dogs sizzling in rows on that old grill encased in the glass windowbox… smell-o-vision at its finest… methodically rolled around ever so gently,  cooked to glistening perfection… some near burnt for folks like me who preferred ’em that way… tucked into those soft steamed rolls (the only way a dog or burger bun should be served)… passed from one sister to the next who squirted a quick line of mustard, then painted with a spoon of that chili.  To complete the “dance,” sister Lily would get and hand you drinks, then push down those keys on the realllllly old cash register for each hot dog and drink in the order, take your money then dance off to the drink box for the next one in line.

Everybody wanted the recipe.  We all speculated on what was in it.  We guessed everything you could think of… I even thought it had cabbage in there since it had a smell about it, albeit a good one for most of us.  That “stink” was like nothing we smelled anywhere else and the chili, for those of us who love it, was a must-have on most late Saturday mornings.

When I was in 12th grade, I got to leave at lunchtime everyday to go to work.  It would be nothing for me to have a wad of money for a “run” to Kannon’s to take back to all my friends at “the smoking area” for lunch.  Many a day I would call and tell them to have 60 hot dogs ready for me.

Way back in the early 80’s, I did my first cookbook… a compilation of Perry family favs.  Someone had slipped me the recipe from an employee who cooked it there… so I put it in my cookbook… always worried they would sue me!  I have had several folks tell me they don’t think this recipe “tastes like Kannon’s.”  It may be because over the years, (I believe) the sister’s would ‘thin’ the chili (to make more gabillions of dollars) so there towards the end, it was losing its good rich taste and was not like when Mr. Barker was around.  Having eat these things since a toddler, I clearly witnessed the slow weakening of the chili.  This recipe is thick and deep in flavor… unlike what came to be towards the end of the cafe’s days.

I’m pretty sure some of my childhood chubbiness can be attributed to Kannon’s Hot Dogs.  Because my daddy’s office at First Federal Savings and Loan was directly across the street, and almost every day after school, my mama would take me to see daddy and he’d give me money to run across the street and get ….a hot dog and a drink.  How I’d love to go back to that simpler time… for the “original” rich Kannon’s Chili hot dog… and a drank, in a glass bottle… on a wobbly bar stool being watched over by the Pope.  Sometimes, even adding a little bag of tater chips.  Mostly though, I’d just fill up on 2 hot dogs with my drank… and didn’t DARE ask for ketchup on the dog… they just didn’t like that and would give you the mean=eye if you did!  Just like your dress… if you weren’t clothed to their liking, they’d damn sure tell you not to EVER come in there “dressed like that again!”  Some were simply refused service.  My sister and boyfriend at the time had been cutting grass one Saturday morning… they went in for a hot dog and drank, and got one of those “talking tos” and the poor fellow NEVER went back again… after the chewing-out sis got telling her she “knew better than to bring him in here looking like THAT!”  (shorts and a tank top… on a hot July day)

So here’s the recipe… I hope those of you from around Zebulon will share your Kannon’s memories down below and let’s all take a stroll down memory lane.  For those of you who live in other areas, if you had a hot dog joint like this, tell us about that too!

What to throw together...

How to throw together...

I have been told that to make the 'original' recipe, the onions are left out overnight to dry out a bit. I have tried that and can tell no difference in taste of the chili.

Instead of 10 small onions as was in original recipe I was given, I simply use 5-6 really large onions. I prefer yellow, white or even sweet onions. A mixture works fine also.

I have also been told that "Sage" sausage was used. I have used all kinds, but use one of the better name brands as there is more meat and less fat. I like to use 1 pound sage sausage and 1 pound hot sausage. *I have also been told there is hot sauce (such as Texas Pete) in the "real" recipe. Since I like my chili with a little kick, I get mine from using hot sausage. If making with regular sausage, add 1-2 tablespoons hot sauce to your taste.